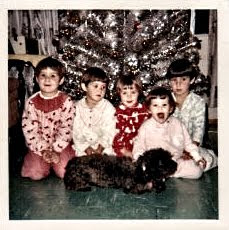 That's me second from the left...it looks like I'm
wondering if I've been good enough to have
Santa Claus bring me a color book and crayons...
but I do remember getting the most beautiful
rag doll made by my very own little mother.
Not the old Raggedy Ann style rag doll,
but a beautiful cloth baby with nut brown
braids and embroidered eyes to match my own.
She even made her several changes of clothes
and a nightgown that matched mine...
I called her Baby Girl.
I don't know how my mother did all that
she did, cleaning other people's homes and
ironing their laundry every week while we
were still in school, but she did so much
to make our house a place of love and fun
filled with happy memories of our early
childhood years. Cooking and sewing
and reading us stories almost every night.
I loved to hear her read to us...even when
we got older she still read to us.
And I'll never forget the story of
Hind's Feet on High Places.
The story of a girl named Much-Afraid.
It seemed  to be my story too...I just
hope my life story end's as Much-Afraid's
story ended, where she gains strength
and courage through her trial,
and her name is changed to
become
Grace & Glory.
I know what book I'll read tonight...
Yes, Hind's Feet On High Places,
and thank you to you my little
mother up in heaven. I will always
treasure this book you gave to me
as an teen when you found out how
much I loved the story...I've read it
several times and will read it's tale
of victory and triumph over fear
once more tonight.
I miss you so very much...it's almost
Mother's Day....it's so very hard with
you your mom and our Sweet William
all gone to heaven...I'll be putting
some roses from my garden on
your stone for you...your favorite flower.
I love you little mother...I love you!
Give my William and Grandma Lou a
hug for me...and tell Dad I'm trying.
Posted by Simply Divine Photography at 7:14 PM